Save the Anthony-Northside Historic Gateway

Nearly 200 years ago, when Muncie was Muncietown, and Wheeling Avenue was the Old Indian Trail, pioneer Dr. Samuel Parsons Anthony located here and was a successful physician and business owner. In his time, he was the wealthiest citizen in Muncie, was by long odds the largest property owner here, was president and/or director of three of Muncie's railways, and his homestead became the Muncie Home Hospital. Dr. Anthony was active in all public enterprises, which seemed to him calculated to promote the interest of this city and county. [Continue reading about Dr. Samuel Parsons Anthony]

Dr. Anthony's grandson Charles Haines Anthony served as president and organizer of Muncie's first gas firm: the Enterprise Gas Company. He was also active in the formation of the Citizens' Enterprise Company, established to lure manufacturers to town. His family had long been active in real estate, and Anthony would use this to his and Muncie's advantage. He was quick to realize the economic prosperity that natural gas would bring and built the Anthony Block downtown. It initially housed the offices of one of the major real estate companies laying out new suburbs around the edge of Muncie during the Gas Boom. [Continue reading about Charles Haines Anthony]

The marriage of Charles and Harriett Bell Mitchell, united two of the county's wealthiest families. They lived at 210 E Adams St, on the present-day property of the Ball Brothers Foundation.

Harriett B. Mitchell Anthony, also known as "Diamond Heels Hattie" for her several pairs of shoes with diamond studded heels, was a socialite and an ardent booster for Muncie wherever she went. She did a lot of traveling, and living in hotels. Newspapers over the country giving her much space and referring to her as the "arbiter of fashions," "Muncie's creator of American fashions," "social sensation of the East," and the like. Her large hats, beautiful furs, fashionable clothing, and her walking stick with a crook in the handle made her a striking figure indeed. Her appearance was so regal [people] must have thought she was a Queen of some country! She proudly told persons in foreign countries "I don't buy my gowns in Paris. These beautiful pieces came from Indiana." [Continue reading about Harriett B. Mitchell Anthony]

Harvey Mitchell Anthony Elementary School was dedicated, on December 7, 1958, to Charles' and Harriett's son, who was director of vocational education in Central High School. Dr. Anthony setup the first electrical laboratory in Muncie schools, and paid for the equipment from his own salary. [Continue reading about Dr. Harvey Mitchell Anthony] 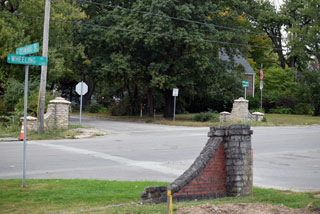 Anthony-Northside's name derives from Muncie's prominent pioneer Anthony family, who were instrumental in the development of the neighborhood and the City of Muncie, and who owned thousands of acres in and around Muncie.

Two of the Anthony family's diagonally-adjacent tracts essentially stretched along Wheeling Avenue from 1909 Hair Company to McGalliard Road, including most of Northwest Plaza and the land to its south. Waid Avenue west of Wheeling Avenue was, until 1958, Anthony Street. At the west end of both Cowing Drive and Anthony Street was the Anthony Farm tract, which spanned present-day Oakwood Building (originally Harvey Mitchell Anthony Elementary School, and later renamed to Anthony Administration Building), Northside Middle School and Anthony Apartments. They sold their land on the east side of Wheeling Avenue, across from Wheeling Park, where the brick monument was later built, to Lewis Cowing.

Of the Anthony-Northside neighborhood's nine subdivisions is the Wheeling Park Addition that was platted in 1928 along the west side of Wheeling Avenue from the north edge of Pizza Hut to the north edge of 1909 Hair Company. In 1927, "Diamond Heels Hattie" B. Anthony sold, for $1 and no other consideration, this part of the Anthony's land to develop a subdivision one mile north of Muncie of 25 lots ranging in price from $700-$1,700. Immediately after the $1 land sale, the developer mortgaged the land back to Hattie for $3,500 and then Hattie transferred that mortgage to the Delaware County National Bank of Muncie two weeks later. Immediately after the completion of Wheeling Park's first home, the Wheeling Park Home, the debt was paid in full and the mortgage was released. 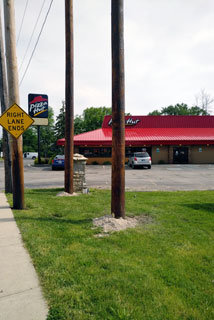 Wheeling Park Addition, with its stone gateway entrance at Wheeling/Cowing, and remaining stone boundary post at Wheeling's Pizza Hut, was born from the generous contribution of Harriett B. Anthony, becoming the last standing structures in Muncie noting her existence.

Of Muncie's additions fronting Wheeling, Wheeling Park, catalyzed by Harriett B. Anthony, with its stone gateway entrance and boundary posts, was the first north of Bethel and largest since the 1800s.

The monuments at the Wheeling/Cowing intersection link together an oasis of a variety of architectural styles, including Dutch Colonial, Spanish Colonial Revival, English Cottage, Eclectic Colonial and French Cottage.

In April 2019, the Anthony-Northside Neighborhood Association (ANNA) learned of Muncie's Wheeling reconstruction project that had already been let to a contractor, and that the Wheeling/Cowing monuments were in the path of. Searching Muncie's public notices for the word "Wheeling", in years 2015 and after, revealed no posting of a public hearing option. The only required public hearing for the Wheeling reconstruction project was in 2007 and INDOT's Cultural Resources Office has no record of it. ANNA was very thankful and relieved when, in April 2019, Muncie's Street Department emailed ANNA and Muncie's Mayor promising us that Muncie would figure out a way to move them until construction ends and then put back on those appropriate corners. However, October and November 2019 were rollercoaster months of learning Muncie didn't, then did (EDIT - Economic Development Income Tax), then didn't, then did (CDBG - Community Development Block Grant), then didn't have a funding path to saving the monuments. By that time, there were no grant opportunities available either; even if there were, ANNA didn't know the cost due to unanswered questions such as right-of-way. 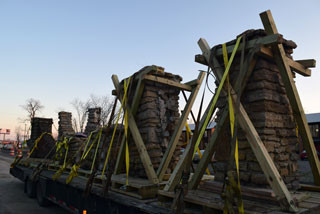 Hundreds of hours and a few thousand dollars have been invested in seeking answers and searching for a solution.

Thankfully, BSU's CAP (College of Architecture and Planning) had earlier contacted Indiana Landmarks and INDOT (Indiana Department of Transportation), and then Indiana Landmarks had sent INDOT a letter of support which INDOT then used to get approval for 80% funding from FWA (Federal Highway Administration), and then DMMPC's (Delaware-Muncie Metropolitan Plan Commission) TAC (Technical Advisory Committee) and TPC (Transportation Policy Committee) approved allocating the deconstruction's 80%, and then Muncie's Board of Works, at the incredibly-appreciated recommendation of Mayor Ridenour and Councilman Jeff Robinson, approved the deconstruction's 20%. In mid-February 2020, the Wheeling/Cowing pillars were carefully deconstructed and safely stored in one of Muncie's storage facilities, just in time for Wheeling's reconstruction project to move into the area the monuments had stood for nearly 92 years!

You can show support for ANNA's activities through a general donation by clicking the "Donate" button above.